Located in the residential area of Bishan – beneath Blk 508 Bishan Street 11, Mata Thai offers a variety of Thai food! For some reason, Towkaynew insisted that the original name was golden Thai. But when we googled for Golden Thai, Golden Thai Massage appeared! Apparently, Mata Thai was it’s one and only name and they have been around for around 7 years. Haha! Maybe he had some Thai Food there before.

But rest assured we had normal Thai Food at Mata Thai! 😅😂😉 When we arrived at Mata Thai, the servers were really friendly and approached us immediately. So, we sat down and started scanning through the menu. The menu was very straight forward – 4 printed pages, easy to read and order.

Within 5 minutes, the server came back and asked if we were ready and started sharing with us what’s nice. Basically, she recommended those dishes with photos printed on the menu. Not sure if those was the signature chef dishes or simply out of convenience. 😂😂 Thai Cuisines are usually quite standard – Pineapple fried rice, Pad Thai, Mango Sticky Rice etc. Regardless of which restaurants but the usual dishes would do the job of distinguishing a good one and an ordinary one. So, don’t need to think so much la! TIP: Mata Thai have Set Meal available from 11:30 am to 10 pm! The set meal comes with a drink and the dish of your choice which is cheaper as compared to ordering them separately. For example, Pineapple Fried Rice ($7.50) with Thai Milk Tea ($2)/ Thai Green Milk Tea ($2.50) in a set cost $8.80. The cost saving may sound little, but if you order 4 set meal you would have saved approximately $3. So be sure to tell them the order number of the set meal or else you may be paying for the price of the food and drinks Ala carte-ly. Drinking every sip of the Thai Milk Tea! 😂

As usual, the first item we ordered was Thai Milk Tea (Cold – $2 Hot – $1.80)! The Thai Milk Tea was nice! You can see that it was freshly made it on the spot from the way it was served! Just the right amount of Thai tea and condensed milk! Not too sweet also! When the Thai Milk Tea was good, there’s a higher assurance that the other dish won’t go too wrong!

Hooray! The food was served swiftly! 😊☺🤗

The Claypot Prawn with Vermicelli ($15) was okay but could be better in my opinion. The prawns were huge and fresh! I find that it could be cooked more (abit more “chao ta”) to let the flavours flow out!

Fried Prawn Paste Chicken with Papaya Salad ($12) comes with fried chicken and papaya salad! The combination of our favorites! Those who have tried papaya salad in Thailand would know how a satisfying papaya salad can bring your taste buds on a ride with its sour and spicy flavours with a bit of underlying sweetness! And it’s crunchy! Sweet, sour and spicy in one mouth. It’s like you hate it but you love it. Sadly, the papaya salad failed to bring back the Thai Taste. While the papaya salad failed to win my vote, the fried chicken was crunchy, juicy and tasteful! Much more delicious than the Papaya Salad! Right amount of crispyness! We ordered the Kway Teow with Prawn which in fact was Pad Thai ($7.50 w/o drink $8.80 w drink). Usually, my favourite Thai dish but the Pad Thai was disappointing. Lacking in taste – no sweetness or any distinct taste. And doesn’t have the wok-hei fragrance! It was too dry and sticks together. SKIP THIS!

Pineapple, chicken floss, raisin, cashew nut and yellow coloured rice! The Pineapple Fried Rice ($7.50 w/o drink, $8.80 w drink) was simple and nice 👍 Nic likes it and he ate alot of Pineapple Rice! Even though it looks normal but it tastes great! And it isn’t too oily!

I am not a fan of green curry to begin with but we ordered because the two boys like green curry! Surprisingly, this green curry was luscious! I may not be the best person to say it’s nice because I have only eaten green curry for a few times. But even the boys said the green curry was “SHOIK AH!”.  And it’s super fresh because you can see that the coconut milk was just added unlike those that they cook one big pot for the entire day! It had the perfect amount of coconut milk and spiciness! Looks like a small bowl but it’s not! The meat given was also very generous. Last on the table was the Mango Sticky Glutinous Rice, the reasonable portion for $6. The mango sticky rice was warm with lots of coconut milk and mango! If you happen to be at Bishan, Mata Thai would be a good place to check out!

Overall, food wise I feel that it’s average! Go for the pineapple fried rice and green curry! Don’t waste your money on Pad Thai or Papaya Salad, easily better one outside. We were surprised by the constant incoming diners that came to Mata Thai and it was quite packed during dinner time despite its’ location. It’s not the place with the best taste or presentation and it is hidden in a corner among salons and nails parlour. Service was great as well! The servers were very cheerful, bubbly, and friendly, ready to serve you anytime! In fact, overly friendly but better than entering a shop with fierce looking staff! 5 star for service which made our overall experience an enjoyable one! 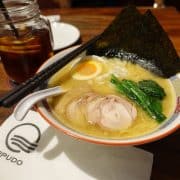 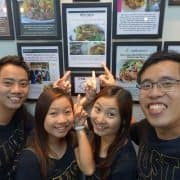 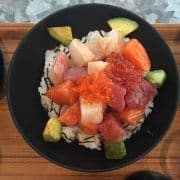 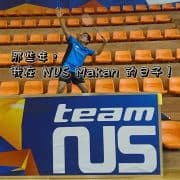 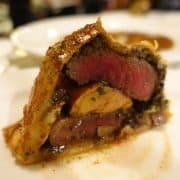